Life is eerily quiet of late. Or maybe I’m simply readjusting to a normal life.

This week I turned off nearly all of the notification settings nested inside my iPhone. No more news alerts about events roosting on the outer limits of my interests. Gone are the intrusive noises or text messages originating from the abyss of social media. Visual and audio silence never sounded so good.

The other day I was listening to a podcast from an author who questioned if the flood of input from our phones was a curse or blessing. Are we masters or servants to our phones? Are we turning inward and limiting our mind’s ability to sit idly and daydream?

This touched a bit too close to home for me. I have never considered myself the smartest person in the room. The only exception might be if I were alone in a room with a chair – and that could still be a debate. But in life, we learn to play the cards God dealt us. For me, finding a creative way out of the proverbial paper bag was always one of the limited numbers of cards in my hand. I found her question unsettling.

Somehow through granting incremental permissions settings, I’d turned my life over to my phone. I was no longer the master, instead, I was responding to the urgency of my phone’s wishes. My time was increasingly subservient to what my phone dictated. Embarrassingly this small black brick of technology had successfully flipped the paradigm of control between us.

Albert Einstein reportedly said he got his best ideas while riding his bicycle. Not to say his bicycle stirred a particular space in his mind, but rather the act allowed his thoughts to wander and roam wherever they cared to go. Creativity works that way – the removal of rules, constraints, and expectations. Apple founder Steve Jobs called the creative process the connecting of unrelated dots in the universe in order to find new solutions.

The magic ingredient is quiet time – the time when your mind is mulling over ideas and thoughts like kernels of corn exploding in a hot pan of oil.

Having the time to daydream is one of our most valuable assets. No computer in the world, even one combining the sophistication of both AI (artificial intelligence) and EI (emotional intelligence) will ever replicate the instinctive creative process. There will only be one Mona Lisa.

Yesterday was a remarkably quiet day. I might have missed a marginal headline being fed to my world, but in the end, the interruption didn’t change my life. When I wanted to see what was going on in the world, I decided when the world merited my attention. Instead, I spent time daydreaming and working to push the intrusive and marginal noises of life away from my thoughts.

Day one was awesome; day two even better. All by taking a few minutes to turn the table on my phone. Daydreaming, after all, isn’t kids play.

The other day and friend and I were talking about life. Jokingly I suggested I wouldn’t be surprised if at my funeral someone might say “well that was fun to watch while it lasted.”

Afterwards, the words refused to clear out my head. It was as if once out, the words were demanding their due contemplation and closer examination. Apparently, a deeply rooted element of my psyche had stepped into the day of light and was refusing to quietly return.

The next day I took the words along for an hour and a half bike ride along the ocean. And along the way, I discovered some interesting answers to questions I never asked myself before. Like why am I attracted to strong, individualists in life, those who many consider the odd or misfits? Or why, when given a choice to do something new versus something I’ve done before, instinctively choose the former? And why is one of my greatest fears is I will run out of time before I get the opportunity to experience everything life offers?

Funny things can happen when your subconscious comes outside to play.

Sigmund Freud would be pleased to hear much of what I learned during this hour and a half of self-psychoanalysis ties back to my mother. And probably for most of us, this is true as well.

I now recognize my mother as a misfit. While she did her best to blend into the surroundings of her time and era, the gypsy mentality of living life with an engaging spirit to all and everything around her was always on display. She made life the life of those around her, remarkable.

An immigrant to the US in the 1950’s, she arrived in New York with essentially a suitcase and her name. And she never looked back. Her ability to look for the good in people, shake off the bad, and always move forward in life became seeds she would plant in me years later.

I remember once sitting up watching a variety show and a segment coming on with a musician playing the piano. Dressed in glitter, rings on all his fingers, and giant candelabra on the white grand piano, I asked why he was so different.

“People might make fun of him but this is America and he’s laughing all the way to the bank,” she said.

I remember how that stuck with me – my mother putting an influential seal of approval for me to view people who were different as the true risk takers, the courageous. For years she would continue to come back to this theme of not being afraid to be yourself and not letting the fear of things not turning out as you planned to keep you from experiencing life.

I was fifteen when her bright candle unexpectedly went out, her passing from the side effects of a routine operation. But fortunately, and what I realized in my hour of self-psychoanalysis, she’d successfully passed along her candle to me to carry. 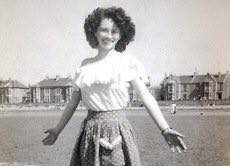 The young man is in his early twenties. He smiles as broadly as the mountains surrounding the small Alabama town tucked at the piedmont of one of God’s practice runs before getting to the Rockies.

“Welcome back,” he says as I approach the counter. My stops off the interstate in his town are more frequent as of late. Waffle House and a hardware store both shadow the hotel.

We walk through the check-in process, he hands me my room key and leans forward.

“I’ve been accepted to seminary school,” he says. “Start in January. Florida.”

I offer my congratulations and shake his hand.

“Yes, sir,” he says, “Felt the Lord’s calling as of late and this sort of popped up out of nowhere.”

I asked him about his chemistry degree, the one he’d always updated me when I’d visit.

“I’m within three classes but I might find a college down there and see about finishing up. Maybe teach and preach one day.”

He tells me about how he’d been telling his mom he wouldn’t be around much longer. Something big is coming, he said to her. She hoped nothing bad was going to happen. He assured her whatever it was would be good – wasn’t going to die or anything like that.

Then came an unsolicited message from a small seminary school planted on the panhandle of Florida. Pine trees, white sand, and Jesus, so to speak.

He’s as puzzled at the turn of event as anyone. He’d said to someone in passing he might one day consider the seminary. He figures a phone call must’ve got placed recommending a young man in northeast Alabama. A letter went out addressed to the ZIP code of a small town populated with green trees and red dirt.

Youth is an odd thing. When we are young, the world is revealing itself with tiny clues leaving us to figure out how to navigate the opportunities ahead. Life outside of the nest can go either way – terrifying or enthralling. For this young man, he seems hardwired for the second.

A bit later he brings out his Bible. Meaty, brown, with gold-flakes reflecting off the edges of each page.

“I figured I might need to start reading this – they might be referring to it,” he says. His eyes are bright, expressive, and hint at someone who might be up for tossing toilet paper through the trees of a neighbor’s house on a moment’s notice.

“I’m reading the easy ones first – the short ones with single chapters.”

As the words hang between us I’m not sure if he’s joking or being serious. A betting man might rightly wager on the latter.

He’s young. His feet are where God planted him on the first day he came to be. But bit-by-bit the world is opening up around him. The winds of change are blowing through the Piedmont of northeast Alabama.  And for one young man, he’s hitching a ride to wherever they take might lead him.